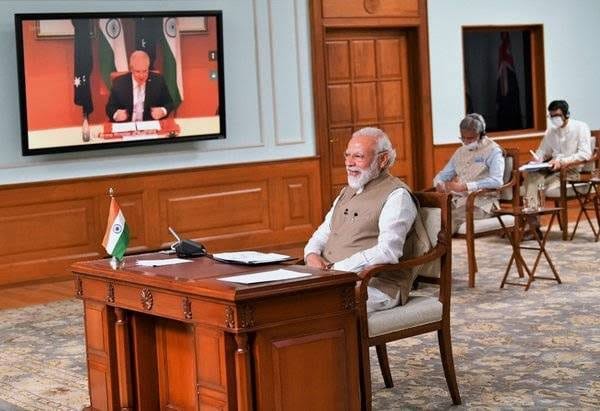 At the virtual bilateral meet, India and Australia signed seven agreements on Thursday. Most importantly, the two nations agreed on sharing the military bases for logistical uses. Under the Mutual Logistics Support Agreement (MLSA), the militaries of India and Australia can utilise each other’s bases for carrying out replenishment and repairs of supplies.

The statement read as “Both sides agreed to continue to deepen and broaden defence cooperation by enhancing the scope and complexity of their military exercises and engagement activities to develop new ways to address shared security challenges.” “Both sides agreed to increase military inter-operability through defence exercises through their Arrangement concerning Mutual Logistics Support,” it further read.

The development amidst India-China standoff at the LAC is considered to be a major diplomatic achievement for India. Moreover, the straining relations between China and Australia are also a grave concern for the former. Apart from downing trade relations with China, Australia has also been vocal about the international review into the origins of the coronavirus.

India has a similar agreement with the US. As per the recent reports available, the country is also considering inviting Australia for the joint naval exercise that it holds alongside Japan and the US in the Pacific and Indian Ocean.

During the meet, Morrison described India as a natural partner for Australia. The ways to tackle Covid-19 collectively was also a topic of discussion. Both the sides indicated a further deepening of the relationship between them.