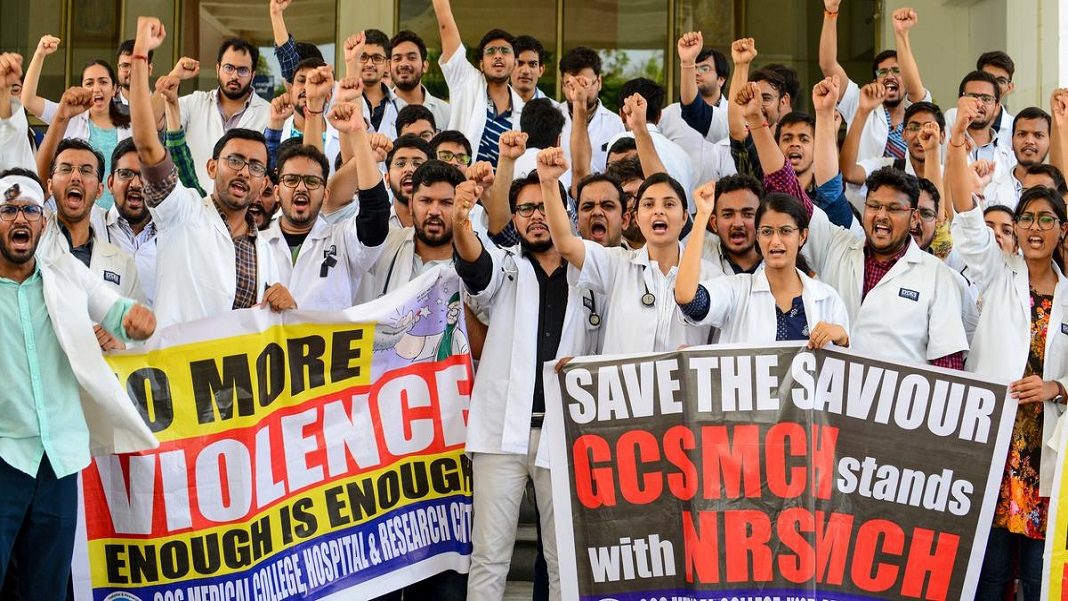 Healthcare sector in India experienced one of the most violent assaults of the recent times when two junior interns in a medical college in Kolkata were attacked. It is true that any form of violence at the workplace could lead to negative impact on employees and in turn harm their work performance. Hence, there arises a dire need for a change in the system, but would strengthening the security of hospitals help in bringing that change or do we need to do something else as well?

As per an estimate by World Health Organization, 8-38% of healthcare workers have faced physical abuse at some point in their career. This might not be a staggering figure but it certainly affects the morale of people associated with the health sector, especially doctors. A man’s perception is proportional to the general consensus of the society that he lives in. Doctors at times have misused their position for their benefits, sometimes resulting in patient’s death.

Indian healthcare segment is divided into public and private sectors, where the latter accounts for almost 80% of the country’s healthcare. Doctors in both public and the private sectors are at the receiving end of the violence. Even system- related factors such as lack of facilities, equipment, drugs, often lead to such incidents. Therefore, it becomes important for us to comprehend the reason behind such course of events.

It’s true that it would be unfair to compare the attacks on doctor with the violence on underprivileged ones but it becomes essential to understand the reasons behind such course of events. One of the main reasons is corporatization of medical practice, as it is believed to have an impact on behavioral patterns of health workers. Misbehavior, over- treatment, under- treatment and over- priced treatment today constitutes an important part of the medical culture. In addition to this, poor conditions of government hospitals, lack of proper infrastructure are the major reasons for the violent attacks on medical staff.

Thus, there arises a major need for a reform in the Indian healthcare sector.  There is a requirement for change in perception of the society and the medical professionals. It becomes the responsibility of the hospital administration to prevent overcrowding in their premise with the help of strategies such as gate pass system and restricted entry. Presence of senior doctors is a must at critical situations to prevent any sort of carelessness.

However, security measures can only bring temporary relief to the medical professionals and there is a need for a change in perception as well. Doctors should remain ethical and treat patients with compassion. Sensitizing a young doctor towards the problems faced by underprivileged section can reap dividends in the long- run as well. There is a need for a system to train the doctors about ethical and moral behavior towards the patients. It has to be a mandatory internship program or part of the graduation course without which one cannot enter the medical practice. With such system in place, medical practitioners will become ethical and compassionate towards the patients.

Besides this, even people in general shouldn’t take law in their hands by attacking the medical staff. They can document the carelessness of the medical staff in treatment of the patients and report it to the designated authority to attain justice. It may not change the current fate instantly but in the long run such reports can make way for a robust and sympathetic healthcare sector in India, which cares for its patients as well as the medical practitioners.