The day when the world was celebrating love, India was subjected to what is being called as the biggest suicide bomber attack in recent times. On February 14, 2019, a vehicle-borne suicide bomber attacked a convoy of vehicles carrying security personnel at Lethpora, in the Pulwama district of Jammu and Kashmir. The vehicle used for the attack was said to be carrying nearly 350 kg of explosives.

Claiming more than 40 lives and leaving many other grievously injured, the attack brought a situation unwanted and toxic. Soon after the attack, Jaish-e-Mohammed, a militant outfit based in Pakistan claimed the responsibility, and released a video with the attacker Adil Ahmad Dar, a local from Indian-administered Kashmir.

In retaliation, along with boycotting Pakistani artists, not broadcasting Pakistan Super League, and cyber war, the Modi government decided to declare a war on terrorism in the neighbouring sovereign.

In the wee hours on Tuesday, February 26, Indian Air Force’s 12 Mirage 2000 jets bombed the terror camps in Balakot, Muzaffarabad and Chakot killing nearly 300 members of Jaish-e-Mohammed. The 1,000 kg payload dropped by Indian jets in Pakistan was a clear indication of the zero tolerance policy related to any terrorist activity within the country.

Prime Minister Narendra Modi, after the Pulwama attack had announced that the armed forces had full freedom and authority to respond to the strike.

Soon after the strike, Pakistan authorities came in action and started foul mouthing the Indian attack on terrorism. After the biggest provocative in the course of history between two nuclear powered nations, Pakistan is seen supporting terrorist activities, once again.

Further, the spokesperson for the Pakistan Army, Maj Gen Asif Ghafoor claimed that there were no casualties or damage of any kind. A few images of only burnt trees destroyed by the attack have also been shared by him on twitter. 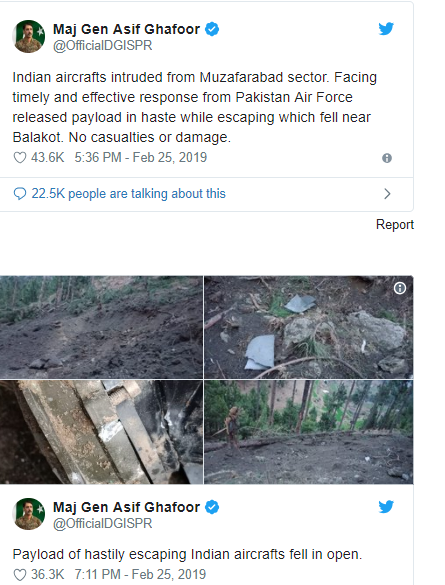 While Pakistan has showcased a naïve response and made false claims about not aiding terrorists on their land, many a time intelligence agencies across the world have proved it otherwise. Resorting to debauchery, the not-so-friendly neighbor has circulated numerous fake photos, videos and statements regarding India’s retaliation to the Pulwama attack.

Proving every historical and political claim correct, Pakistan’s tactics clearly indicate their support for terrorism. Instead of what should have been called a praiseworthy eradication of militants in a war torn area, the Pak government decided to bomb India, and later release videos of a captured IAF pilot, which is clearly against the Geneva Convention. Moreover, the bleeding from mob thrashing and his swollen face in the latest video, showcase Pakistan’s disregard for any policy ever made for POWs.

Instead of being thankful for shaking the roots of terrorism, Pakistan, as always has given statements that highlight their interest in blossoming violence and spreading lies.