In India’s defence industry, the term ‘Indigenization’ has become a byword and achieving it, a challenge. The country needs a strategic outlook and economic strength to capitalize on indigenization in the sector. The merger of India’s defence manufacturing plan, with the homeland security doctrine and a result-oriented FDI, will end its struggle to meet the defence strategic goals.

India lacks a composite view of integrated global security and commerce collaboration. Despite being the fifth largest military spender in the world, the country imports over 60 per cent of its defence equipment.

Baba Kalyani, the President of Society of Indian Defence Manufacturing said, “The real problem with India’s defence sector is that there is no demand.” The buyers shun away from sourcing military equipment from India due to its apparently outdated security apparatus. The problem with India is that it underlines price, rolling out tenders to private defense firms that barely invest in research and development, over-promise to attain contracts and even dump projects. 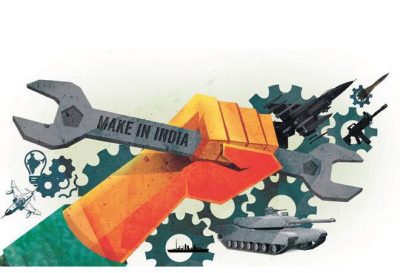 In 2017, an Indian-made rifle was rejected for two years consecutively after the Indian Army cited quality issues. Products like Arjun tanks, light combat aircraft and bullet-proof jackets, made by the private players, are not fit to be used due to performance issues.

Still, there is great latitude for India to invigorate its defence manufacturing scenario. Since comprehensive defence production has a high multiplier effect on homeland security, innovation, employment and industrial growth, a result-yielding policy framework is what India needs. It will ensure upgradation of the armed forces, pursuant to India’s strategic interests.

However, the Indian government has taken some remedial measures on this front. Recently, in the draft Defence Production Policy (DPP) 2018, the government has pronounced its defence ambitions. It plans to boost indigenized defence production, which will not only ensure self-sufficiency, but will also cater to the demands in the foreign markets.

While the process of improving defence exports continues, there is another way to analyze the scope by comparing India’s defence budget with China. At present, India’s military is ranked fourth, after US, Russia and China, but the country allocates three times less budget than China on defence. India, despite spending considerably less than China, stands in the league of the strongest militaries in the world. Moreover, China has emerged as one of the largest weapons exporter from a state where it was completely dependent on imports, so the prospects for India are even brighter.

French multinational Thales, which has businesses spanning across defence, aeronautics, transport and security, plans to double its headcount in India, with its turnover trebling to €1 billion over the next five years. Half the battle is already won if India continues to attract more of FDIs and emerge as a hub for defence production.