Geographical and historical factors have largely defined the internal and external security environment of the country and still play a major role in determining the security strategy, especially the northern region, including the major border disputes. Since our northern neighbours are upping the ante on their hostile anti-India strategy,it is important that we revisit the experiences of our security forces and evolve our border protection strategy to deal with the developing security threats. 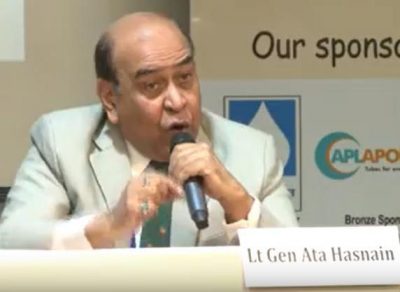 He stated that conceptually, it is important to understand the unresolved border issues as they are on a special stage and have the potential to transform into a warlike situation.

He took the example of China and Pakistan to identify the misperception of security arrangements in the northern region. For instance,the Siachen Glacier conflict is looked upon as a forgotten conflict. However, it keeps emerging again and again with varied intensity.

He said Siachen is looked upon as a “low hanging fruit” and there is a misperception that it could easily be resolved by declaring it as a zone of peace. Unfortunately, it is far more serious than it appears to be and it needs more serious analysis to develop the right border security strategy.

There is a common misperception that the Siachen glacier is occupied by both the Indian and Pakistani army, however, the fact is that the Pakistan army is quite distant from the glacier but has left an impression of their presence on the glacier.

The general Ata Hasnain emphasised that there is a high possibility that “the untrustworthy Pakistan Army” will annexe its grip and lead to the repetition of the Kargil war and given the difficult terrain of 21000 ft, the difficult ratio of “9:1 or may be 12:1” will lead to losing more than 5000 lives.”

Syed Ata Hasnain said that the ambitious China-Pakistan economic Corridor nested in Shaksgam valley is extremely important. “Siachen, being our northern-most territory, is closest to China Pakistan Economic Corridor and poses a possibility of collision if we leave Siachen .Evacuating Siachen will also become a major challenge as we will lose our protective front of Leh and Ladakh.”

The sensitivity of the Kashmir border issue is something that has kept India on its toes since 1947 and the series of events, plotted by Pakistan, suggests that it will continue to be the same for a good duration. The General said that despite the challenges, we will need to stick out to fight for our right, which is the complete territory of Jammu and Kashmir.

On the other hand, there have been murmurs that given Prime Minister Modi’s confidence building visit to Beijing, India and China might move towards resolving itsunsettled border disputes. However, the General Ata Hasnain though feels it’s a distant possibility.

He said “China will not resolve its border disputes with India, not until 2050. China has made it very clear that it is not in a hurry to take leadership of the world. By appointing Xi-Jinping as a president for life and its aggressive modernisation plans of its armed forces, it is preparing to take a leap by 2035 so that it is in a position to fight and win any war by 2050.”

“Until then, China will keep on extending its coercive activities on the borders from time to time against its competition in Asia. It will aim at coercing India sufficiently to keep it in its place”

Though we might be able to avoid a full-fledged war with our hostile neighbours sharing borders with India, the forces are likely to be occupied with coercive activities with huge amount of experimentation in cyber warfare, psychological warfare, information warfare and military skirmishes. The recent increase in LOC violations by Pakistan and the Doklam standoff testify the same.

It is highly important that we look at the panoramic view of security challenges at the border while devising any political and military strategy around the internal and external security. It is also critical to win the trust of the Indians as it plays a major role in helping the army at the time of warlike crisis.