Terrorism is one of the major concerns that needs to be taken care of immediately. Since Pakistan has already changed its master India will have to take a front foot in addressing the issues related to terrorism. One of the major factor that has prompted terrorism and nullified the measures taken by security forces has been ‘terror funding’.

Another case of Kashmir terror funding and absconding of Hizbul Mujahideen terrorist Nasir Safi Mir 2006, has been taken over by NIA from Delhi Police. He was a resident of North Kashmir who allegedly used carpet trade and later a money exchange business in Dubai for sending hawala money to separatist leaders in Kashmir. He is believed to have fled the country by secure a passport from a southern state which he allegedly used in Nepal in October 2008 to leave for Europe.

Such cases raise a larger concern of identifying the channel of illegal money flow to the country as terrorist groups use advanced methods for terror funding. They exploit fragmented regulatory regimes and trade for sponsoring terror. Moreover Mir’s absconding also raises a major question about the security breaches both financial and movement of criminals.

Such national security issues need direct and spontaneous address, but given the complexity of crime it becomes difficult for security and investigation forces to analyse huge amount of data in the limited time. We need to upgrade our security forces with the advanced big data analytics tools that channelize huge amount of data to portray a pattern of transactions and help is identifying such activities beforehand to prevent major attacks.

Today there are also financial data analytics tools that can be used by enable banks and other financial institution to keep a check on suspicious inflow of money. The anonymity provided by the internet though has created a big challenge for the security forces to identify the criminal but it can be sorted by monitoring and analysing the pattern of transaction in a particular course of time.

It is already clear that people of Kashmir are been instigated by external forces such as Pakistan against the existing government by both sponsoring terror and shattering confidence on government’s security capability. We need to identify concrete evidence against the offenders to win majority confidence in the valley which is required to develop and maintain peace in the region. 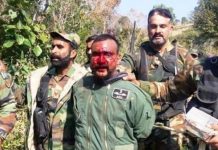 Is India Lacking A Robust Cyber Security Policy And Infrastructure?