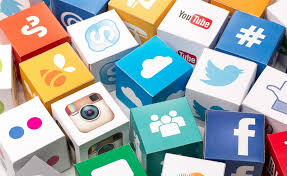 In one of his recent tweets, Prime Minister Modi urged Police officers to take lead in using social media effectively for direct communication with the masses, putting forth another example of digitization. He further stressed on the use of local languages on the social media platforms to counter the language barrier that can effectively help foster communication between the police system.

In the contemporary era, social media has bridged the gap between police and the masses, which was earlier a major barrier in ensuring effective policing. Nevertheless, the regional police stations are yet to join the league.

There has been a huge transformation in the police system and their approach towards law enforcement since, their inception in India from the colonial era. In the colonial era the Police system was largely associated with coercive measures to implement laws passed by the government with just bare minimal consideration given to the people of the country.

Resultantly, this coercive behaviour got so strictly registered in the mind-set of the people that they still face trust and comfort issues with the existing police system, creating a communication barrier as well as a negative perception.

However, as stated the police system only worked on the colonial lines with just a little of whatever direct communications they had with the masses, as a result creating a barrier. Laws today are not made to serve the government but to protect the people and their interests. Thus, for the implementation it is important that the same is being communicated to the masses so that they understand the relevance of the law enforced upon them. There comes the role of social media which has over time proven to be a successful awareness platform for the same. For instance, the following tweet shows Allahabad Police portraying the importance of following speed limit with the use of local language and graphical representation for better understanding. 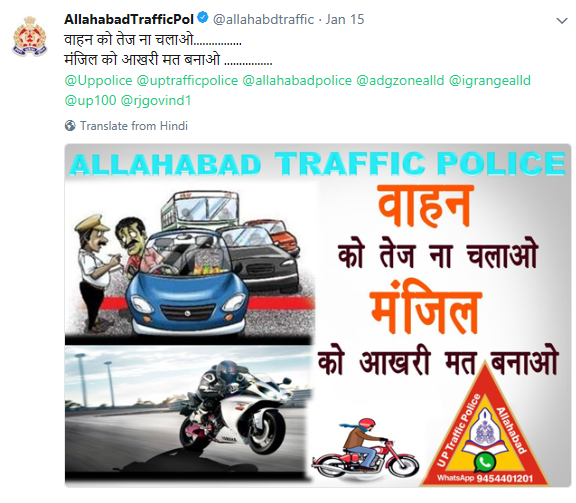 In order to fetch adequate public cooperation and ensure safety of the people, social media has proven time and again to be an apt method of communication between the police and masses. Similarly, in the following tweet Delhi Police can be seen urging the people of Delhi to keep a close check and follow the rules of verification before keeping a PG. 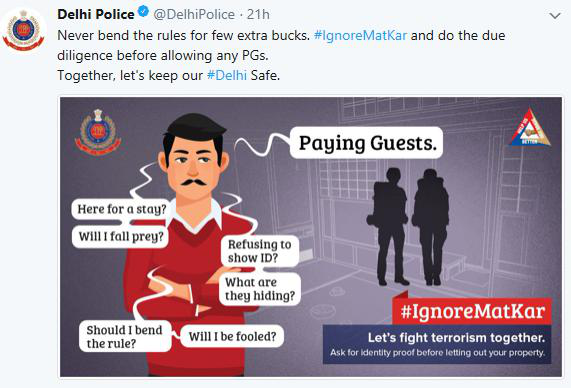 If people cooperate by following the rules of verification it will be easier for the police forces to track criminals beforehand and avoid the occurrence of crime in the first place. Hence, ensuring safety and security of the citizens. Such efforts to communicate safety guidelines using social media not only ensures safety, security and effective communication but also involves the community in strengthening the roots of law enforcement in the country. 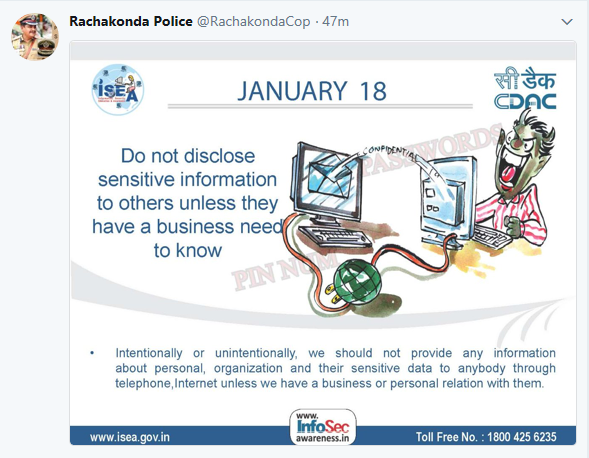 As PM Modi stressed in the Valedictory Ceremony at the Conference of Director Generals and Inspector Generals of Police at BSF Academy at Tekanpur, even though security apparatus of the country is working hard to ensure the security of the country, there are certain challenges and issues that need to be understood and dealt with. He also stressed that said cyber security issues should be dealt with immediately, and should receive the highest priority considering everybody is on the Internet these days.

Social media today is a very powerful tool communicate information and hence must be capitalized by our security apparatus to have effective law enforcement and security of our people.

Data security laws like GDPR should be based on a golden...